Winging my way to Auckland

Its 1.49 am on Friday 30 August - I am sitting in my rather comfortable seat in Premium Economy on a Qantas flight from Singapore to Brisbane and we must be an hour or so away from landing. The breakfast trolley is making its way towards me and my eyes are feeling rather gritty from the very brief sleep that I have managed to get since departing Singapore less than 6 hours ago. I have another flight connection to make once I land in Brisbane.  I am heading home to Auckland to celebrate my Dad's 80th birthday and am very excited to be seeing many wonderful family members and friends whilst in town for the week as well as take part in a 10 km race starting on Takapuna Beach on Sunday morning with my gorgeous girl Soph.
I seem to have deviated from my low carb high fat diet and eaten nothing but high carbs and high sugar since I left home yesterday morning having left my lunch in the fridge which resulted in bought food from a cafe close to the office followed by airplane food - a sample you can see here from the breakfast tray which has just been put in front of me. 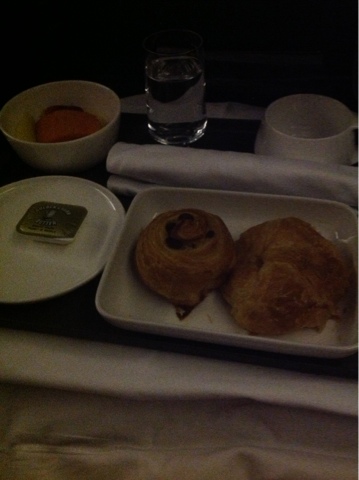 I decided to try Premium Economy on Qantas to Auckland via Australia when I found it was the same cost as flying economy direct from Singapore - its 10 hours flying time and having extra leg room was very appealing.  So far its been a great decision - Premium Economy feels much like business class (having had my first ever experience of that recently on a work trip to Tokyo) although the seats don't go completely flat but they do recline a lot more than economy.  I also enjoyed a wonderful movie selection along with a glass of merlot (in a glass rather than plastic cup). 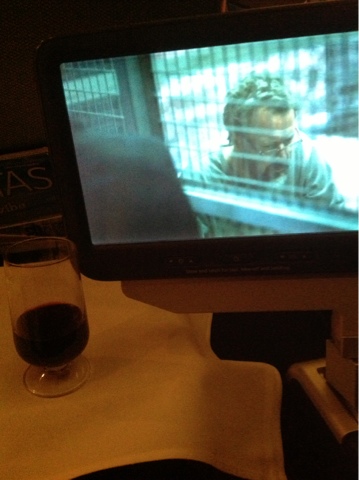 Then to add to the pleasures a few chocolates were delivered.... 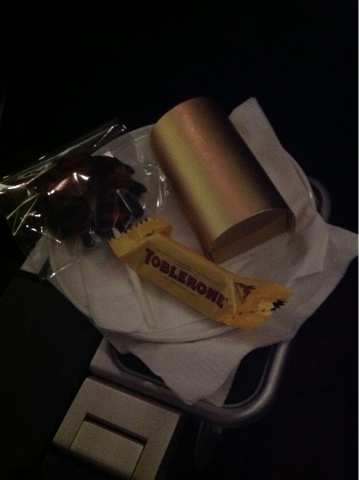 So you can see where the high sugars have come in.
The other good news about flying via Australia is that it breaks up the 10 hour journey and there is benefit in that as being claustrophobic I really try and avoid the airplane bathrooms.  7 hours is more manageable than 10 hours. So this trip could become a very viable option.  The only downside is the flight from Brisbane to Auckland is back in economy but its only 3 hours.
Anyway, the flight is about to land - next blog update will come from Auckland - see you there :)
Posted by Unknown at 10:15 PM