On the 5th October 2012 I started a new adventure in Singapore.  A friend I used to work with at The National Bank in Auckland had moved to Singapore and knew of a position that she thought would be perfect for me.  As my 19 year old daughter, Sophia, had moved down to Otago I thought why not go and have an adventure - so off I went.
Thankfully my very close friend, Morag, (who I had also met 12 years before in the same Bank) lived in Singapore and she very kindly had me to stay for the first month whilst I started my new job as an HR Manager and searched for a place to live.  Morag lived in Tiong Bahru and strangely enough only 6 months earlier when I had visited her on holiday we had laughed over a glass of wine about how great it would be if I got a job in Singapore and moved next door - that is exactly what happened.
On the 4th November I moved into my new apartment next door to Morag and started my adventure.  I am a real homebody so I promised myself that I would stay for a minimum of a year as no matter what happened I could manage that - but I split it into 4 quarters to make it not seem too long.
My first quarter was spent settling in to my new neighbourhood, new job and establishing a new routine.  I got over my fear of the MRT (subway) which was jammed solid every morning and as it only cost 79 cents to ride as opposed to $15 in a taxi the claustrophobia was going to have to be gotten over.  I also had my first trip to Hong Kong for our HR off-site before heading home for Christmas.  I also celebrated a significant birthday in January with family and close friends (life does begin at 50) and managed to fit in a few swims on Takapuna Beach with my old friends from the North Harbour Triathlon Club before heading back to Singapore for the start of Quarter 2.
In early 2012 I had challenged myself to do my first half ironman which took place in Mt Maunganui which I finished in 6 hours 54 mins (not fast but I was stoked to finish) and I very much wanted to keep my fitness up.  I entered the Metasprint Triathlon series in Singapore and began training.  My new apartment complex had a 50 metre lap pool so swimming wasn't going to be an issue - I also joined a cycling group and a local triathlon club where I met some wonderful new friends who I really enjoyed training with.  The heat in Singapore was a very big challenge as it was in the 30's most days with high humidity. Quite different from the more tepid NZ climate.  However, the race series started - the sea was warm, the bike course flat and the run course scenic and I managed two podium finishes (out of three events) - 3rd in my age group - which I found it quite amusing as I was usually last in my age group in NZ - so I was very happy.
Quarter 3 took me again on work travels to Hong Kong, China and Japan - I felt quite excited by the wonderful opportunities I was experiencing including running around these great Cities. Tokyo was a highlight - the people and the food were amazing.  I also managed to have dinner with a home stay student we had stay in our home for 12 months 16 years earlier - how wonderful.
I am now into Quarter 4 and headed to Sydney a few weeks ago for work but also managed to enter a 10 km event around the Sydney harbour.  My swimming and biking had dropped off but I was managing to run most mornings wherever my travels took me.  Given the heat I had been training in recently in Singapore I was worried whether I could run 10 km in under 60 mins which is a bit of a guideline for me as to my fitness levels.  Anyway race day dawned brightly but about 30 degrees colder than Singapore (about 2 degrees) - The course was stunning running under the Sydney Harbour Bridge and out to Darling Harbour and I was thrilled to cross the line in exactly 59 minutes - my fitness was still there.
On my return to Singapore I decided I needed another challenge - its not quite time for ironman which I had hoped to do to celebrate my 50th but the Singapore marathon which attracts thousands is on 1 December.  Whilst this wont be my first marathon (I have done London, New York and Rotorua to name a few) it will be my first in a tropical climate.  I am not likely to beat my best time of 4 hours 12 mins but I might beat the 5.02 time I did in Auckland last year after a rookie mistake of going out too fast and running a great half marathon in 2.06 and then having to walk the last 17 kms  (thank goodness for great friends like Helen Kilding and Clara Budd who helped with that).  I have now signed up for the Singapore marathon with the added fun of keeping a blog of the training - with some updates about life here in Singapore - I have also challenged Morag's sister, Kirsty, currently visiting, to do her first ever 5 km race (which also happens to be on 1 December) so will be keeping up with her along the way.  Hope to see you follow my blog.....and may be pick a challenge to join Kirsty and I.  I will be looking at a great training programme with the help of Sue Dorman and some nutritional tips and other advice which will help us on the way. 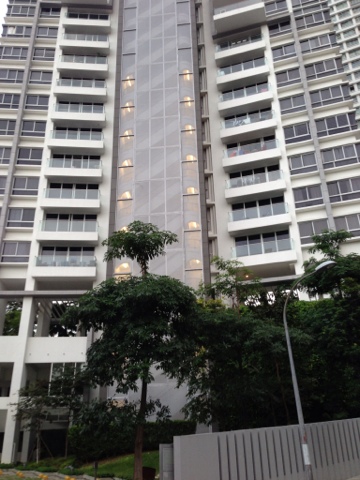 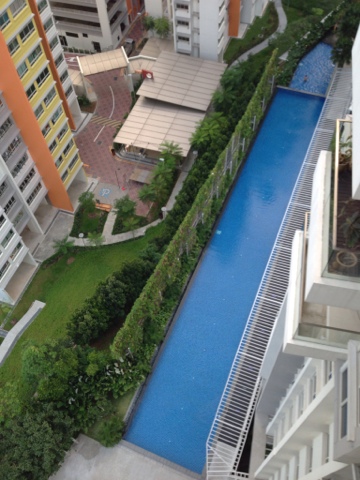 View of the lap pool from the bedroom 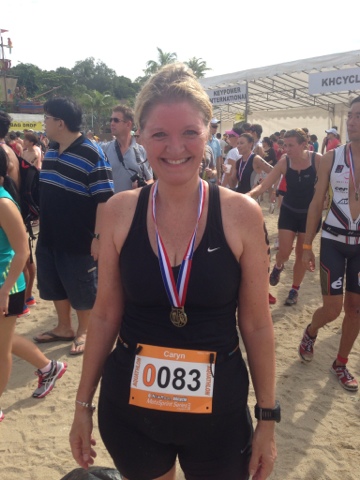 Very happy after finishing one of the Metasprint triathlons.
Posted by Unknown at 3:35 AM