Simone and I headed down to Rotorua on Friday 13 November 2015 in readiness for the Tarawera 50km event taking place the next morning.  It is quite a surreal feeling to face the realisation that we really were about to run 50kms (somehow when you train each week you never expect race day to actually arrive - but here it was less than 24 hours away). Once we had registered and collected our race numbers we headed off to pick up takeaways for dinner (burger fuel) and then decided it might be wise to get an early night.

To be fair I didn't sleep at all well - I was awake at midnight, 2.30 am and then 4.30am.  I finally got up around 5.45 to have a hot shower followed by a light breakfast (banana and cup of tea).  Coach Sue and husband Graham were picking us up at 7.15 to take us to the starting line, so we were ready and waiting by the time they pulled up outside our motel.

It was a stunning day with clear blue skies and no wind -  perfect for such a big day out.  The race started at Te Puia amongst the geysers and mud pools - it was such a relief when the start was finally underway.  The 50km walkers left first at 8am followed by the rest of the field (marathon and 50km participants), 30 minutes later.

Strangely enough it took me about 10kms before I felt I was part of the event  (this has happened before for events that really take me well outside my comfort zone) - it also took an hour and 20 minutes to get to the 10km mark.  I was starting to realise that the Tarawera trail was going to be one of the most gruelling events that I have ever taken part in. The terrain was quite unforgiving and there were some parts that I literally had to crawl up on my hands and knees due to the steepness of the trail.

There were aid stations every 7 kms and I was blown away by how well catered the event was but also wondered how on earth the organisers were able to set up tables in middle of the forest laden with every possible food imaginable. That must have been quite a feat in itself.

There were parts of the day where Simone and I felt quite physically sick (thankfully not at the same time) - but possibly from the sheer challenge that the trail provided - on some occasions our hearts felt like they were going to burst from pumping so hard.

The scenery was magical but to we were so focused on putting one foot in front of the other that I doubt we enjoyed our surroundings.  By 28kms (4 hours 15 mins) we were asking ourselves what on earth we were doing (in language that wasn't quite so pretty). 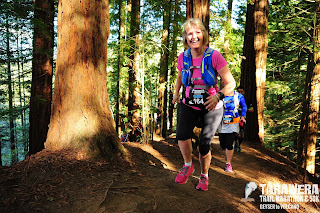 We managed to run together through to the Buried Village (or just slightly beyond) which was at 35kms.  This aid station put on scones, jam and cream which are a vice that I couldn't pass up and unfortunately I didn't feel too well afterwards (no surprises there)!  The trail out of the Buried Village was up some very steep steps and I had to let Simone go on whilst I slowed up a bit to get over the feeling of nausea.

I went through the 40km mark in 6.5 hours and realised given the terrain that there was another 2 hours ahead of me.  However, I knew at this point that I would definitely finish the event despite my toes being very blistered and sore.  There was a shock to come at the 46 km mark on hearing that the next two kilometres were practically vertical and at this stage of the day there was very little left in the tank.  However, persistence pays off and at 48km the last two kilometres were all downhill - albeit a very steep trail down which was quite slippery due to the gravel.

It was such a relief to reach hot water beach - 50kms - I don't know where I got the strength from to run to the finish line but it came from somewhere.  It was awesome to see Simone there who had finished about 15 minutes ahead of me - we were both so relieved to have survived the day.  It was now after 5.00 pm - 8.5 hours after we had left the start line.  The longest day out that either of us had ever had in any sporting event. 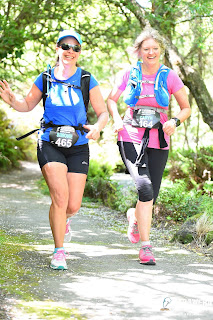 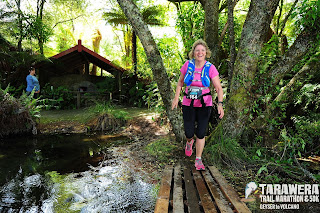 We then had a two hour wait to get on a boat back to mainland - the queue was so long and there were only two water taxis - we were beyond tired although managed to inhale a sausage and glass of beer while we waited.  We then took a shuttle and a bus back to the start where we then had to walk a kilometre back to our motel (I don't know how we managed that).  We finally arrived back at the motel at 8pm, ordered an indian takeaway, sat in a spa, then ate dinner hardly able to speak a word to each other. I did manage to phone Sue to see how she had done on the course and was very impressed to hear she had finished in just over 7 hours (such an awesome result).

Then blow me down if Simone didn't say she thought she might do it all again next year   Really?